Just being a top-level ballplayer on his way to racking up 3000 hits wasn’t enough for Roberto Clemente. The legendary right fielder enlisted in the United States Marines Corps during the 1958/59 off-season. While many major league players wintered in Puerto Rico and played ball, Roberto spent six months on active duty at Parris Island, South Carolina, and Camp LeJeune, North Carolina. He ended up serving during every off-season until 1964. The rigorous training he received during that first 6 months helped Clemente physically by gaining ten pounds of muscle and ridding him of long-time back pain.

The military was an important part of his life and his pride as a Puerto Rican and an American. Along with only 6 others out of his 130-member platoon, he was promoted to private first class. But, Roberto’s legacy is that his drive didn’t end at personal achievement — his true drive was built on much more: “If you have an opportunity to accomplish something that will make things better for someone coming behind you, and you don’t do that, you are wasting your time on this earth.”

Roberto Clemente™ under exclusive license by 21 in right, Inc.

Shirt is very comfortable and I love it!!! 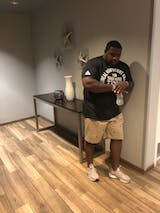 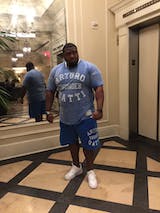 I’ve contacted you twice. I never received the shipment. Thank you. Barry