“Last night I had a dream. When I got to Africa, I had one hell of a rumble, I had to beat Tarzan’s behind first, for claiming to be king of the jungle, For this fight, I’ve wrestled with alligators, I’ve tussled with a whale, I done handcuffed lightning and threw thunder in jail” –Muhammad Ali, ahead of his epic 1974 fight with George Foreman

They said he couldn’t win. They said Muhammad Ali was going to get hurt. They said he was past his prime. Overrated. Out of his league. They said Foreman was too strong. They fretted and worried.

Ali heard it all as music and danced. Then he came off the ropes and struck. The “Rumble in the Jungle” stands as boxing’s great work of art. And that night in Zaire, Ali — the greatest that ever was — rendered all those saying all those things speechless. We celebrate the incomparable Muhammad Ali's greatness!

Love It, My Ali correction is crazy now 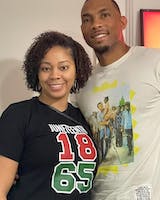