New sweatshirt sizing, please check the size guide to get the right fit!

Unlike many of the icons represented in this collection, the name Jackie Robinson was not yet universally recognized before joining the armed forces. The future Brooklyn Dodger was drafted to the US Army in 1942, some three years before playing professional baseball and five years before breaking the color line in the Majors. As a result, Jackie was subject to the same unfavorable treatment as his fellow black soldiers.

When applying for a position in Officer Candidate School (OCS) - a spot rarely given to black applicants - Jackie and his colleagues’ applications had been delayed for months. After protests from Joe Louis - who was also stationed at the same base - the men were accepted to OCS. This experience led to the growth of a close friendship between Jackie and Joe.

Robinson was no stranger to this type of treatment. The experiences he was subjected to during the court proceedings of an unwarranted court-martial would be remembered when he later joined MLB and was subjected to racist attacks. After he was acquitted, he served as a coach for Army Athletics until receiving an honorable discharge in November 1944. Just a few short months later Jackie was back in the ballpark setting to change the course of history. 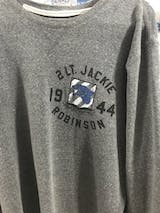 J
J.L.
Just what I expected and more

I love everything about this sweatshirt. Quality fabric, great fit and great craftsmanship.