“A life is not important except in the impact it has on other lives.” –Jackie Robinson

There are feats of greatness in sports, moments that define a game or a team or a legacy. But Robinson’s feat of greatness was one of necessity, courage, exceptionalism and professionalism. By being the first to break the color barrier, Robinson became a symbol of equality in dreams. But he paid the price for being first. He endured being ostracized by Big League players and fans, and found himself a frequent target for bigotry in the media and beyond.

Endure he did. And when the outside noise faded, he walked away not only an icon of the sports world, but a Hall of Famer, a six-time All Star, a World Series champion with the Brooklyn Dodgers and a National League MVP.

April 15 is officially Jackie Robinson Day, and throughout baseball the iconic No. 42 is worn by everyone. We celebrate the great Jackie Robinson, who impacted not just baseball but generations of athletes who benefitted from his courage.

Amazing shirt fits true to size and love the quote on the back.
Would recommend.. 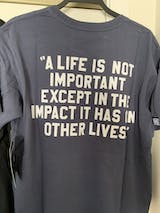 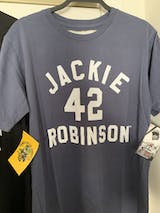